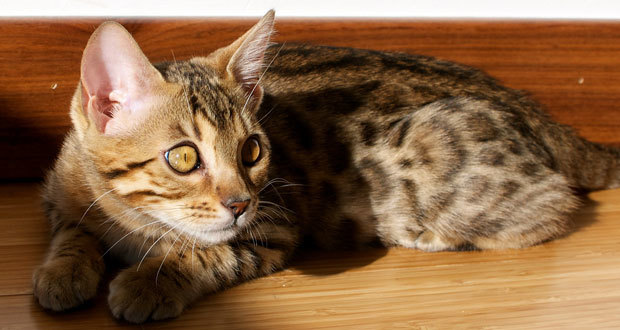 The beauty, strength and independence of wild cats has long attracted people to them, many have even attempted to raise wild cats such as cheetahs, tigers and even lions. However, this was often met with very low success rates, a lot of heartache and even injuries. The Bengal was crossbred specifically to meet that desire for a little “wildness” but in a safer way. Jean Mill began cross-breeding the smaller wild Asian leopards with domestic shorthaired breeds in the 1960’s. All of the Bengal cats available today descend from the original cats or F1’s that were bred successfully by her in the 1980’s. The International Association for cats began recognizing Bengals as a breed in 1991. However they are still not acknowledged by the Cat Fanciers Association.

The most prominent and recognizable feature of a Bengal cat is its coat. Soft, lush and dense with distinctive leopard spots which can be random, in a marbled pattern or horizontal in half circles with rosettes. Most Bengals are black or brown, though some have been engineered to be snow marbled or spotted. The spots should always be in a vivid contrast to their background color.

These cats stand out for another reason, they can “glitter. This is where their coats seem to have been coated with gold or pearlescent glitter. This trait is a natural occurrence and is another reason Bengals are highly sought after, though it does not influence the judges in a show ring.

The Bengal is a long and muscular, usually medium to large sized breed that features a broad head, prominent whisker pad and higher cheekbones than most breeds. Bengals have round wide eyes, and small rounded ears. Having longer legs in the back only emphasizes the Bengals wild appearance, these cats are very graceful and able to move quite stealthily. This is not a delicate, dainty cat but a smoothly muscular predatory looking cat. Sometimes people worry because of its wild and more feral history that this cat will be harder to handle. This is untrue however, the Bengal is a domesticated cat, though it may never be a lap cat per say. They love attention from humans, and are often quite close with their families. They are great with children, since they have the same amount of energy and love to play games.

Unlike most domestic breeds that shy away from water, this cat has retained its wild Asian Leopard ancestor’s affinity for swimming. You may find this cat in the shower with you, or jumping in the pool. They can also hunt, small animals on land and even fish. While moving things to high shelves may work for most kittens, the Bengal cat has a surplus of energy, and loves to jump to and from high areas. You will need to “Bengal proof” your home, removing breakables from high open areas. Be wary of a breeder that says their particular breed has no genetic issues or any health problems. They are either flat out lying, or are not knowledgeable about their breed. Every cat has some sort of health issue, and you need to be aware of them. Bengals have hereditary health issues, sometimes they develop polycystic kidney disease, but a DNA test can isolate and remove these cats from the market. They tend to be more likely to get trichomonas foetus which causes diarrhea, and infectious peritonitis. Breeders are generally knowledgeable and can advise you how to avoid these problems.

The most common issue with Bengals, is obesity. It is important for you to know how much your cat should be eating, this will save you money on vet bills, since this is the number one health issue for these cats. Keeping them brushed at least once a week is a good idea to keep their coats healthy and lustrous. The rest is just basic care, cleaning their ears as needs, nails trimmed and things of that nature. 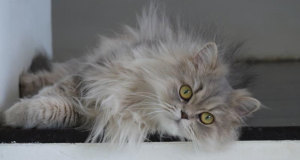